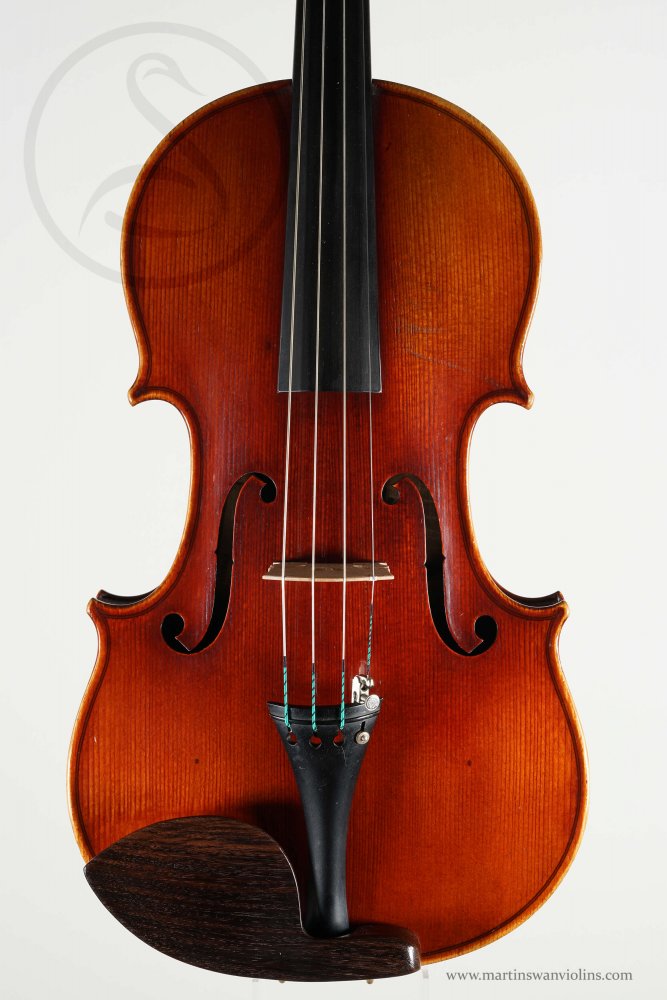 This is a very beautiful smaller viola by perhaps the most under-rated French maker, ASP Bernardel. As always with this maker, the workmanship and the sound are of the highest quality.

ASP Bernardel seems to have fallen slightly under the shadow of Vuillaume’s success, yet he was a precursor to Vuillaume, his work is better, and his instruments always sound great – this definitely can’t be said for Vuillaume, many of whose instruments are total lemons.

Perhaps a tendency towards oversized violins has led to Bernardel Père being slightly sidelined by the market, but he is the true successor to his teacher Nicholas Lupot, and as such he carries the torch for the French tradition through most of the 19th century.

This viola is a lovely example of his work – very exact in its details yet still fluid, and with a gorgeous opulent varnish with just the right amount of shading. After 170 years this viola still looks arresting yet soft-edged.

There is a near-invisible post crack in the table and some significant pizzicato marks to the right of the fingerboard, otherwise the instrument is in immaculate condition.

I’ve never played an ASP Bernardel instrument that didn’t sound tremendous, and this viola didn’t let me down. Unusually bright and warm for its size, with a great singing tone and a lightning response.

The size (39.3) was the most common viola size throughout France and England for most of the 19th century, and while many orchestral players will risk their future health to play small cellos under the chin, this size offers an articulacy and projection which is hard to achieve in a larger body.

We have been specializing in small violas for around a decade, but this must be the best sounding instrument we’ve had under 40cm. It’s a joy to play, and it would be a godsend for any accomplished player who needs a smaller instrument that works.

Look at other violas like this ASP Bernardel Viola