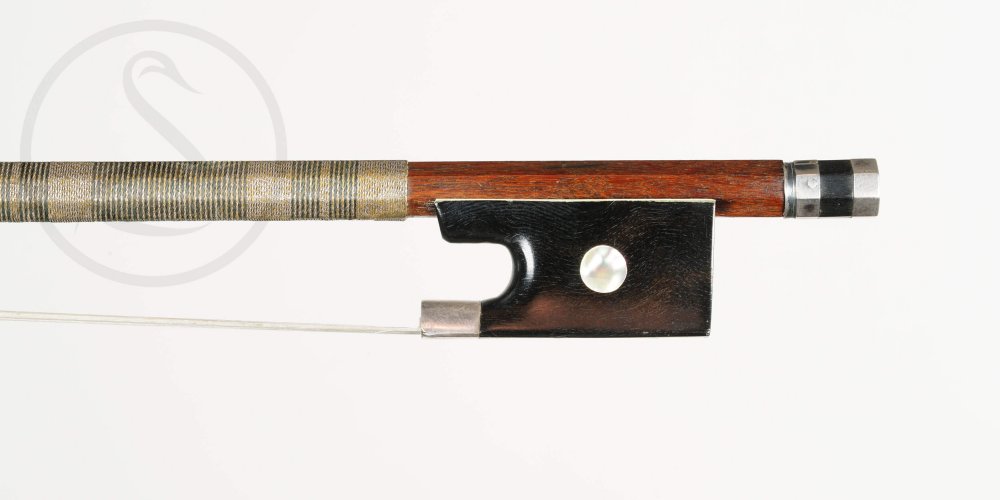 This is a rare example of the work of Auguste Lenoble, one of the most undervalued of 19th century French makers. It’s in near-mint condition with original lapping, though with a later button.

Auguste Lenoble trained with Francois Peccatte, and his work shows many similar points of style. “L’Archet” suggests that he was more of a restorer than a maker, and is strangely damning about his work – I think this must be to do with the fact that he used a Peccatte brand, to which he was only entitled by dint of his having shacked up with Francois Peccatte’s widow.

But who are we to judge? We might also point out that this is a fine and robust stick in the manner of Francois Peccatte, made with more verve and with better materials…

The stick is of round section mid-brown pernambuco with a good figure, mounts are silver and ebony.

The bow is beautifully preserved but is lacking its original button – the lapping is original and quite historic. The handle carries the Peccatte brand on the audience side.

With its original silk lapping this is a light bow but the sound is mighty. As with the work of Francois Peccatte, the stick is of low density but the graduations are quite thick, and the result is a bit more like a viola bow. Lots of cushion, a dark full sound and a feeling of complete control.

If you’re looking for a big sound without the calories this would be a great choice – it’s also a fine and classic 19th century French bow at a joke price.