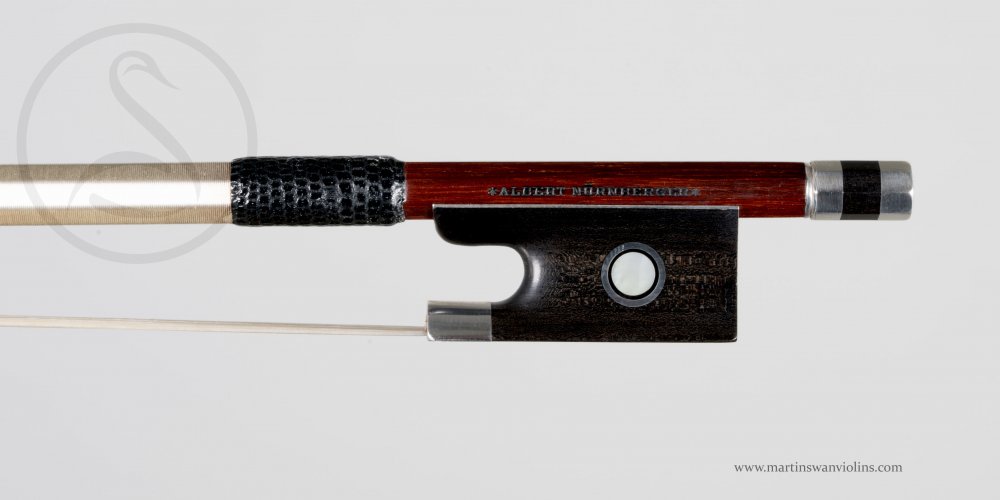 This is a classic 1930s Nürnberger bow in mint condition, and a very solid player drawing a big tone.

The Markneukirchen Nürnbergers have pretty much defined German bow-making. Their bows are ever-popular, very distinctive in style and beautifully made.

This bow is unmistakable the work of Carl Albert, and is almost identical to the example shown on page 155 of “Deutsche Bogenmacher”. It’s a Tourte model, with the characteristically massive parisian eye, and using the trademerk white mother of pearl. The stick is of deep red octagonal section pernambuco, mounts are of silver and ebony.

The “Germany” stamp behind the frog tells us that the bow is pre-WWII, and was probably made for export to the US.

The condition is pretty much pristine, and I would suspect this bow has hardly been used.

Ok this is not a light bow … 20th century Nürnbergers tend to be on the heavy side, like the later Hill bows, but this is in response to demand for bows that can produce a big projecting sound, and which can handle the exigencies of modern repertoire.

This bow can certainly do all that!

The stick grips the string very well, and in combination with a dense pernambuco you have a real powerhouse of a bow. Fortunately it’s supple enough not to be unwieldy, and it’s surprisingly easy to get this bow off the string. The sound is dense and meaty but with plenty of edge.

Ideally suited to a 20th century musical universe, this is also a highly collectable bow in outstanding condition.

Look at other violin bows in this price range