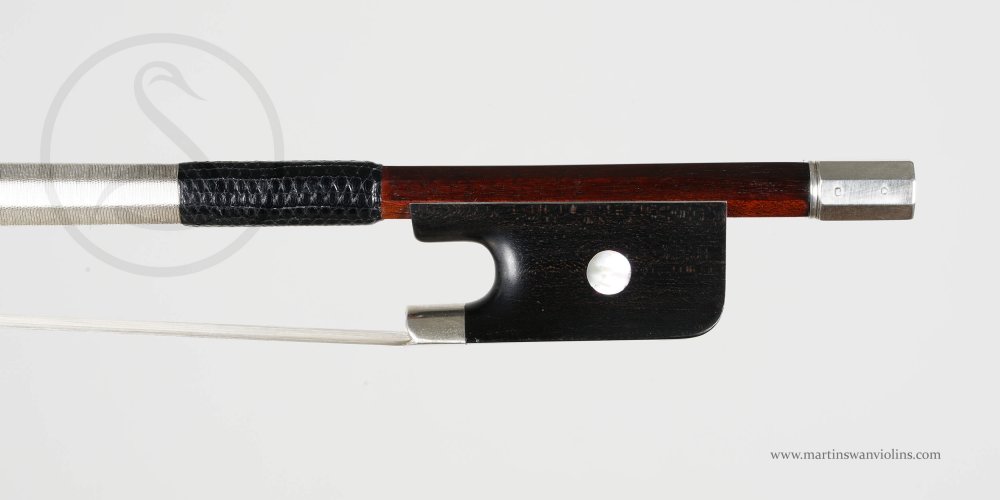 This is a very fine violin bow by Charles Claude Husson, one of the last makers to join the Vuillaume workshop. It’s in excellent condition and an outstanding player with a bright, open sound.

Charles Claude Husson is one of the more under-rated makers of the late 19th and early 20th centuries. He moved in hallowed circles working first for Vuillaume, then with Voirin and Gand & Bernardel Freres. In general style and sensibility his work is an excellent synthesis of Voirin and Vigneron. He remains in the shadow of these makers because he mainly worked for the trade, and few of his bows bear his own stamp. Most were supplied to violin makers and carry their brand (for example Nestor Audinot or Joseph Hel), many such as this bow are unbranded.

In spite of Husson’s willingness to remain in the shadows, his work is unmistakable and of very high quality. The heads are particularly distinctive, skeletal when seen in profile but fat and muscular when seen from above (the certificate uses the word “trapu” meaning “stocky”).

The stick is of deep red pernambuco, veined and highly figured. Mounts are of silver and ebony. The button is slightly oversized for the stick which leads us to conclude that it may not be the original, even though it’s by Husson.

The condition is pretty faultless – there’s a small nibble in the handle on the player’s side just behind the frog, otherwise nothing to report. The finish on the stick is quite beautiful, and the head is as sharp as the day it was made.

In terms of playability, the reference to Voirin and Vigneron holds up. This bow has the refinement and brilliant clarity of a Voirin, but with the strength and assurance of a Vigneron.

In other words, it’s a superlative French bow of the period – it has a certain virtuoso flair, but it’s controllable and comfortable too. It will handle any kind of repertoire, though its essential character is solistic. There aren’t many bows that would seem appropriate for both Bach and Bartok, but this is one of them!

The issue of the button has no effect on the playability of the bow, but it does make it quite affordable…