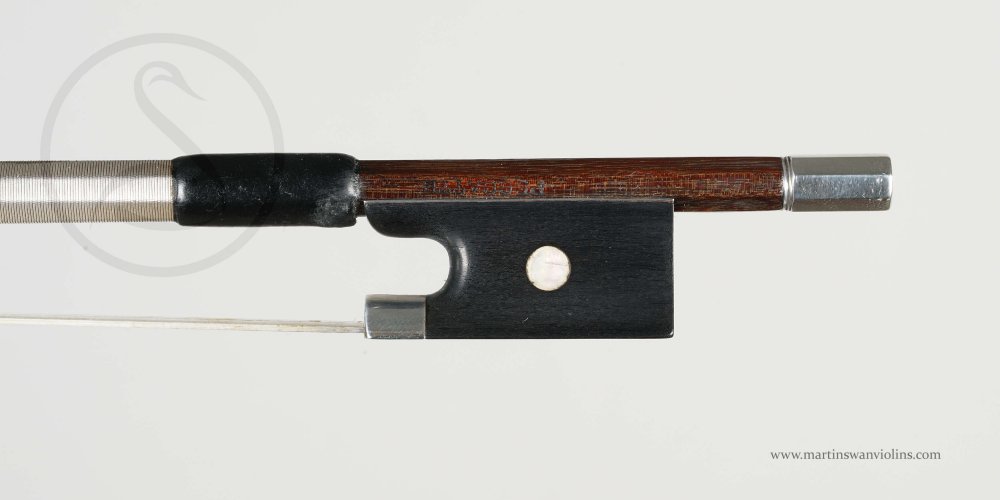 Nephew to Dominique Peccatte and son of François, Charles Peccatte was one of the select group of makers who served time in the Vuillaume shop. Here we have a very fine example of his later style, a great playing bow in an excellent state of preservation.

Charles Peccatte isn’t particularly well known as a maker – much of his early production was for Vuillaume or Lenoble, and then for his first 15 years as an independent bowmaker he also had a job as a civil servant, and was always wishing he had more time to make bows. Much of his known work dates from the turn of the century like this bow, and it shows a very individual character. He was very aware of the reputation attaching to the Peccatte name, and his bows are highly evolved musical tools.

This example has a stick of round section mid-brown pernambuco with a distinct figure – mounts are silver and ebony. The bow has some minor wear to the top facet of the handle but otherwise it’s in excellent condition as noted on the certificate. Branded on both sides of the handle.

This is a remarkable bow – the sound is full and warm but with a very distinctive fizz in the higher frequencies. For such a strong sound it’s unusually refined.

The balance between strength and suppleness is ideal, and the bow definitely feels closer in conception to the Peccatte school than to Lamy or Voirin. It has that combination of core and spring which seems so difficult to find in 20th century bows, but which we all learn in time to desire!

Interesting how this bow seems to do a lot of the work for you where a more resistant stick can feel tiring.

Overall this is a very focused, sophisticated and self-assured bow with a uniquely complex sound.