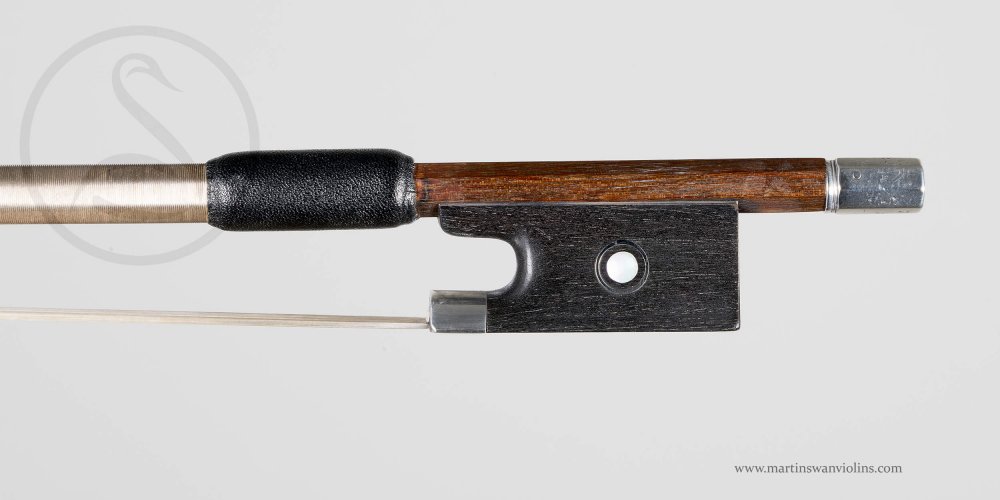 A lovely French bow from one of the less well known makers of the early 20th century – very similar to EF Ouchard in style, also in feel. Robust yet quick on the draw, and pulling a big rounded tone.

Clasquin is very undervalued compared to his contemporaries, for no other reason than that his output is quite small. Every other week a Sartory sells at auction, and every time the price goes up just a little …!

There’s not much biographical information on Clasquin – he is known to have worked for JTL before the First World War, and he set up on his own in Paris after the war. The similarity with the bows of EF Ouchard is striking, and it’s safe to assume that there was some connection between the two.

This particular bow is from the last few years of his production, and the head is more elegant and skeletal than his earlier work. The stick is of orange round section pernambuco with a mild figure, the frog is very square with very tidy silver work and a short button. Overall it’s a very striking bow and the condition is generally excellent – the only issue to note is a bit of staining on the audience side of the head.

I’m not familiar with Clasquin’s bows, but I plan to keep an eye out for them – this is a lovely player, very meaty but without any sense of heaviness. It feels very crisp and articulate, and the tone is bold but nuanced – very easy to control, with quite an effortless legato, but plenty of energy in the spring too. All in all, something of a bargain at the price …!