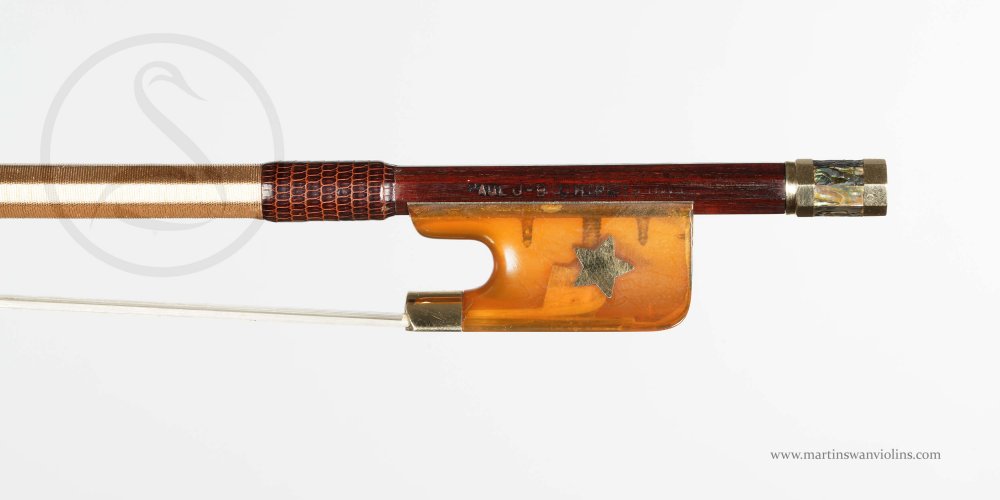 This is an exceptional decorated gold and tortoiseshell violin bow by EA Ouchard. It’s in near-mint condition and is one of the finest 20th century violin bows we have seen.

EA Ouchard is rapidly emerging as one of the two giants of 20th century bow-making, and amongst bow aficionados he is perhaps even more appreciated than Sartory. This particular bow made around the time of the Paris Exhibition of 1937 is a real show-stopper – the wood has the most intense flaming (unfortunately impossible to capture in studio shots), the mounts are honey tortoiseshell and gold, even the pearl is of outstanding quality.

The star motif is very rare – there is a gold and ivory cello “star” bow featured in L’Archet made for the Paris 1937 Expo, and the world-record-beating “ex-André Navarra” gold and tortoiseshell cello bow that sold recently at Tarisio is a very close relative.

The condition of the bow is excellent – there is a small chip in the varnish of the top facet of the handle and a crack to the ivory face on the audience side, otherwise the bow is in perfect condition. The leather and tinsel lapping appear to be original.

This is an outstandingly beautiful bow to look at but it’s not just a pretty face – the weight, balance and relative strength of the stick are all pretty much perfect, and it’s a tremendous player.

In terms of playability this is EA Ouchard’s golden period – his later bows aimed at the American market tend to be heavy and very stiff, and in his early period he didn’t always use the best wood.

In this example I think we get a sense of EA Ouchard’s ideal – this is uncompromising work, made to satisfy the most demanding of clients, and to serve as a testament to the maker.

There are very few EA Ouchard bows of this calibre in existence, and it’s all the more rare for having had so little use. It should be looked after with care, but it’s a dream of a bow for a musician and it should also be played. We would recommend to any future owner that they protect the handle and the lapping, and that they refrain from using this bow while under the influence of drugs or alcohol.

Interested in this decorated EA Ouchard Violin Bow? Look at our other rare violin bows