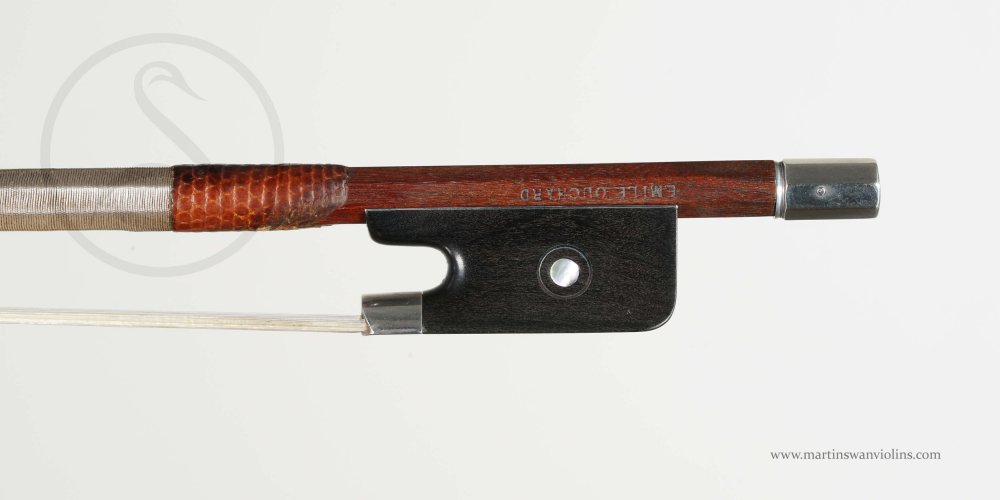 Emile Auguste Ouchard is the only 20th century maker whose popularity rivals that of Sartory – here we have a rather special bow from the late 1930s retaining all its original features. An outstanding player’s bow too…

This model of bow with its distinctive low frog was commissioned by a professor of violin named Magadur who taught at the Conservatoire de Rennes. In the 1920s and 30s there was something of a trend for personal models, and we see models commissioned by Lucien Capet, Aimé Kling etc … generally the modifications are quite minor and the maker’s style shines through regardless. In this case the depth of the frog as been reduced to 18.5mm from a normal height of around 20mm – in all other details this is a classic EA Ouchard.

The stick is of octagonal section orange-brown pernambuco with a remarkable broad figure, mounts are silver and ebony. The lapping, thumb leather and pearl elements are all original, making this quite a collectable example.

The condition is excellent – some signs of use to the handle, a small chip to the frog on the lower audience side and the tiniest of nibbles to the very tip of the head, otherwise the bow is beautifully preserved.

EA Ouchard’s star has risen dramatically in the last 20 years, and many bow aficionados would rate him more highly as a maker than Sartory. As with Sartory, his later work can be quite heavy, but in the early and middle periods he produced bows with outstanding playing qualities, and this bow is a great example.

It’s smooth and supple yet nervy, with a full, dense tone – whether it’s a particular success of the model or a feature of this stick, there’s a rare combination of warmth and definition. The stick feels supremely controllable and the bow does everything superbly, always with this rounded and noble tone.