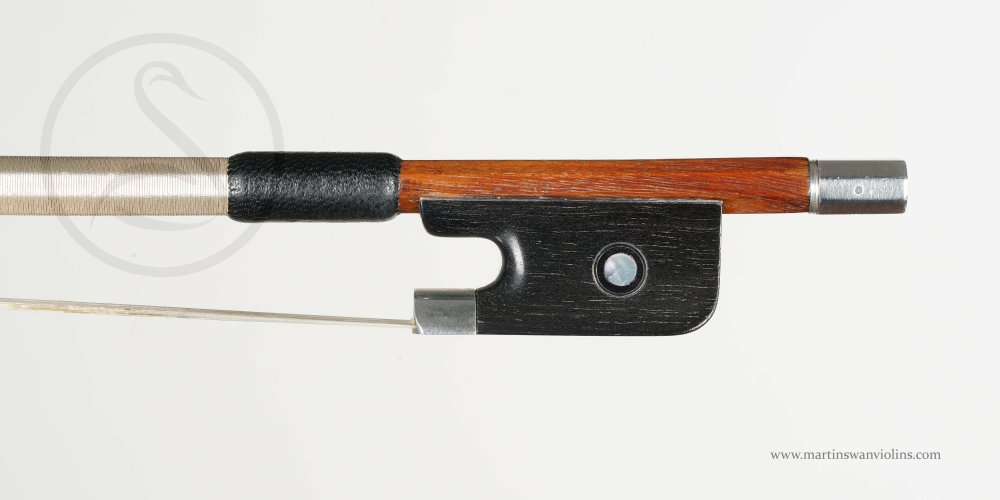 We always try to keep a few bows by Ouchard Père in stock. His work is very dependable and quite undervalued.

Although eclipsed in reputation by his son Emile Auguste, EF Ouchard was an influential and very capable maker. The only reason why his bows are less valued than Fétique (for example) is that he remained in Mirecourt rather than making the move to Paris.

This bow is a good example of the Ouchard workshop output, dating from the period of collaboration between the father and the son (collaboration is perhaps the wrong word since we understand that they quarrelled incessantly). The stick is of round section red-orange pernambuco, typical rounded heel and tapered pearl slide, and a rather distinctive head, very broad across the top.

The condition is excellent with no cracks or damages.

This is a strong and characterful bow with very good tonal properties. It plays rather more like an early 19th century bow than an early 20th century one, with a big and bold spring. It’s not floppy or weak in any way, but it’s not a Sartory! I tend to favour these kinds of sticks, very responsive but supple, since they tend to produce the fullest sound. This bow grips the strings beautifully and gives a broad dark sound with a hint of grit – the spring is very positive but also quite wide. If you’re looking for a big sound which will blend easily and fill out a section, this bow would be ideal.