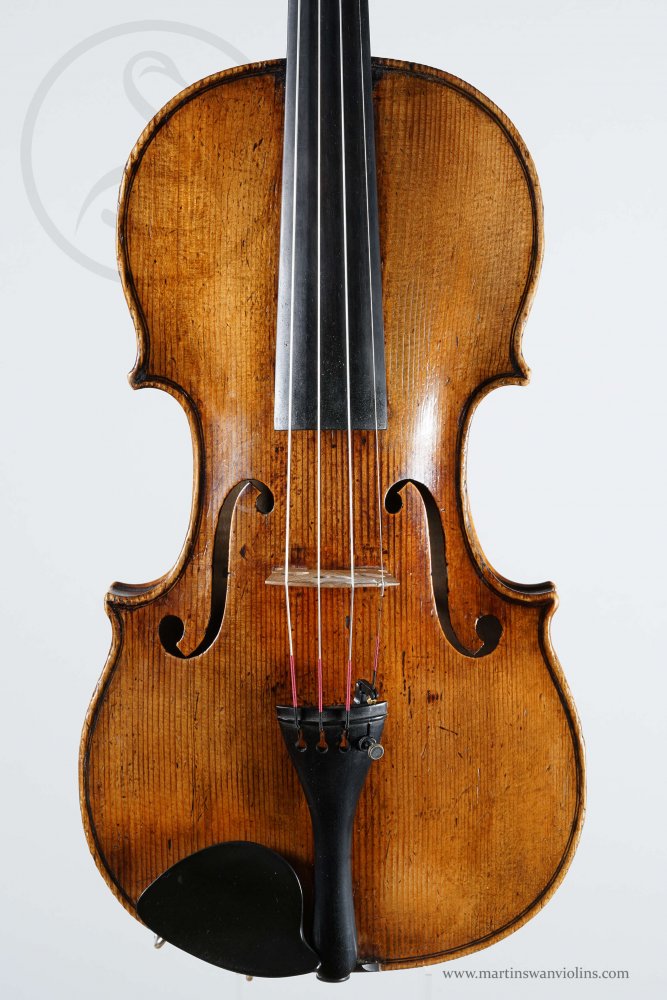 Emanuel Adam Homolka was the most talented maker to emerge from the Strnad workshop in Prague. His violins are rightly valued for their artistry and their tonal qualities. This is a lovely example with a unique silvery timbre.

I have to admit to being completely obsessed by the Prague School, and in particular the instruments of Caspar Strnad and his contemporaries or co-workers. Consistently adventurous in model, with exquisite workmanship and great tone, these instruments are generally rather better than Italian violins of the period. Of all of these makers who trained under Strnad, Emanuel Adam Homolka has achieved the greatest fame – he was clearly something of a visionary, and the modifications he made to the Strnad model were ground-breaking and successful.

This is a very typical example of his work – he generally used broad-grained spruce for the table, the back and ribs are of exceptional figure, the corners are long, the f-holes set close to the edge and appearing to hang from the branch of a tree. The scroll is also unmistakable with its heavy swing and diminutive head set forwards.

The condition is unusually good, and there’s no post crack to the table – there’s a small repaired crack below the bass f-hole, and another on the same grain line above the f-hole, otherwise no issues to report. The varnish is original and well preserved, though the colour has faded from a deep red-brown to a golden yellow.

There is a second handwritten label on the treble top rib which tells us that this was EA Homolka’s 72nd instrument as an independent maker – in fact he had made many instruments in the Strnad workshop before setting out on his own.

We have yet to come across any instrument by Strnad, Homolka or the various other members of this school that sounds bad. In fact their instruments are consistently better than any contemporary instruments from Italy. In my opinion only Lupot and his circle were working at a similar level.

This is a very fine violin but I won’t pretend it’s for everyone. It’s loud and super-responsive, the sound is brilliant and crystalline, but it’s not for a lazy player. It would be a superb violin for recitals, and it excels in classical and baroque repertoire. Don’t misunderstand me – the lower register is full and gutsy and the violin certainly projects, but it’s not the right violin for some Juillard slugger – for that you need a Lupot! This violin is fundamentally Central European, refined, burnished and elegant.