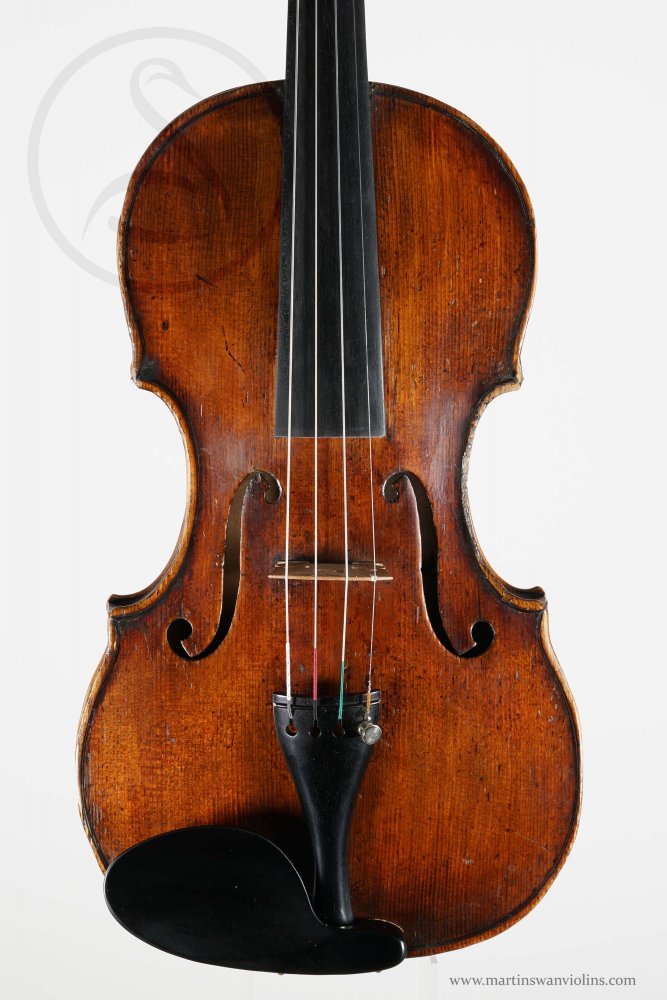 This is a remarkable and intriguing del Gesu fake, most likely the work of TJ Holder. It’s a beautiful violin with a first class sound, but I don’t suppose we will ever know for sure who made it.

The latter half of the 19th century saw various English makers engage in the making of very faithful copies of Italian instruments. Some of these were acknowledged by the makers (Jack Lott is probably the best known of the del Gesu copyists), but others were darker undertakings, sold in the trade and intended to deceive. The Vollers are the most infamous of these, but George Wulme Hudson and John Wilkinson also produced dangerous fakes.

Both of these makers were initiated into the dark arts by Thomas Jacques Holder (1842-1922), and it seems likely that this violin is an example of his work. It sits somewhere between Jack Lott and the Vollers, it’s too successful to be Wulme-Hudson or Wilkinson, yet not quite clever enough to be a Voller.

The violin itself is a very closely observed copy of del Gesu. It was surely heavily antiqued when first made, and it’s hard to know exactly what’s original. Probaby all the varnish distress and the heavy c-bout wear are original, maybe even those missing corners and the wear to the varnish in the upper treble rib.

It’s tempting to restore some of these features, but there’s a very strong argument for leaving the violin as it is – one day we may find a similar instrument with a label or a signature inside it.

Looking at the violin under UV I would say that the button “repair” is original, as is the scroll graft. However, there is a restored post crack to the table which is later, there are some other minor restored cracks (a wing crack on each side and a couple of short saddle cracks), and there’s a later small repair to the bottom rib.

We’re pretty besotted with this violin – it has a fantastic Guarneri sound, dark, creamy and powerful. Most likely it spent some of its life in service as a del Gesu, and it easily outclasses many a fine 18th century Italian instrument.

You couldn’t describe the sound as clean – it is edgy and articulate with a fine pop to the start of the note, but the tone is very coloured on the G and remains fruity right up the scale. It’s a soulful violin with a unique character, intimate and slightly veiled yet muscular enough to work in a big hall. It won’t be to everyone’s taste, but there are a few players out there for whom this will be the violin of their dreams!

If it was the only violin in the world that I was allowed to play, I wouldn’t feel deprived…