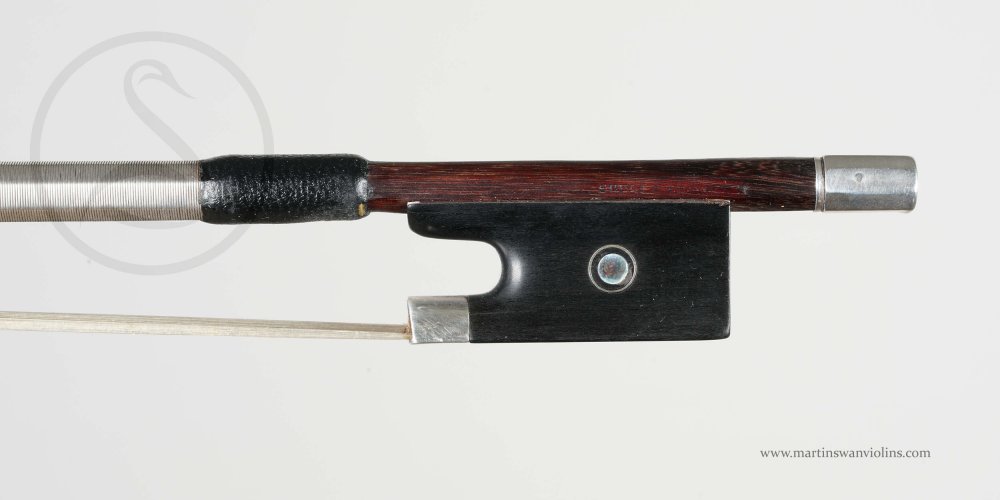 Sartory bows are universally admired for their reliablilty and for their quality of workmanship. This is a lovely early example from Sartory’s best period – the condition is very good, and it’s a spectacular player.

Eugène Sartory is a maker whose star continues to rise, and the demand for his bows seems insatiable. Although his later bows can be rather stolid, both aesthetically and as players, Sartorys are always made with great precision. No other 20th century maker has met with such universal approval, and Sartory prices continue to increase year upon year.

The early bows are generally more refined and individual – as a consequence they are valued more highly than his later output, much of which has a bit of a workshop feeling about it. This example from around 1910 is typically elegant, the head narrow in width and across the forehead, much closer to the style of Lamy than the later heads. The stick is of very dense dark red pernambuco, slight in cross-section and irregularly figured – just great bow wood! The frog has those beautiful understated Sartory curves, the button with its hardly detectable second collar, also very characteristic of the period.

This is a player’s bow, and while there are no significant condition issues it’s had a bit of use – the thumb projection is slightly worn on the player’s side, there’s a bit of thumbnail wear in front of the frog, and the adjuster is dented at the end on one side. There are also a few minor marks to the stick – all of this has been taken into consideration when pricing the bow.

Whilst many power players value Sartory bows for their solidity and heft, the earlier work is always more subtle. In this first period, Sartory seems to have shared the ethos of Voirin and Lamy, yet his bows are always critically just that bit stronger and more usable …

This is a really great example, very dynamic and nervy but also solid and controllable. The sound is broad and fat but still edgy and solistic – there’s a very satisfying crunchy attack, and a lovely combination of warmth and air.

We’ve sold a good number of Sartorys over the years, but I don’t think any have been better players than this one.