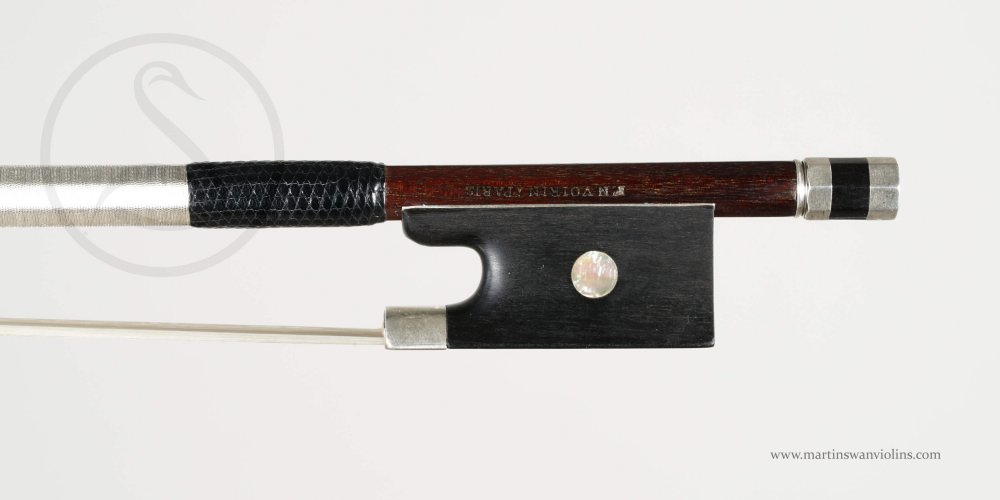 A very fine bow by one of the most influential French makers of the 19th century – a strong yet refined playing bow in excellent condition.

FN Voirin is the most innovative maker to have emerged from the Vuillaume workshop, and his exact and artistic approach set the standard for all the makers who followed him.

This is a relatively typical example of Voirin’s later style, but slightly unusual for having a very strong stick. If one criticism can be levelled at Voirin, it’s that he sacrificed strength in favour of finesse, but this bow has both.

The stick is of round section dark red pernambuco, mounts are silver and ebony. There are no condition issues to report other than some minimal wear to the handle on the audience side of the bow – the brand is crisp and the head is very pure.

This is another top Voirin – stronger than most, drawing a big, convincing sound with lots of overtones. Very hard to run out of power with this bow, and it maintains its energy right to the tip. The spring is slightly more 19th century than 20th – which is of course a big plus in my book. Strong enough for the heavy concerto repertoire, nervy and easy to get off the string, but not so stiff that it skates on the strings or loses the beauty of tone.

So in short, both a very collectable example of this great maker’s work, and a very impressive bow for a musician.