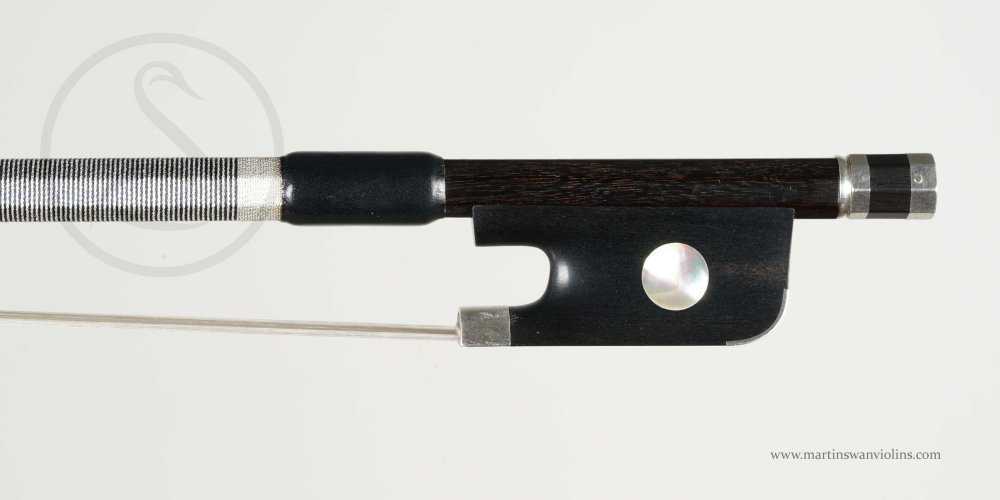 This is a very fine Eury stick with beautiful copy mounts by Simon Guillaume. The condition of the stick is exemplary, and the bow draws a massive sound.

Along with Persoit, Jacob Eury occupies the hallowed ground in French bowmaking between FX Tourte and Dominique Peccatte. His bows are used by soloists all around the globe – they are beautifully engineered and unusually consistent for an early 19th century maker.

This example is one of the best Eury sticks we have seen, almost unblemished and very nicely proportioned, with a very artistic and surprisingly modern-looking head. It’s made from round section pernambuco of a quality that’s only to be found on bows from the early 19th century, very dark but with a deep translucency in sunlight.

The mounts are direct copies from the famous Jacob Eury No.1 in “L’Archet” – Simon Guillaume had this bow on the bench while he made the copies.

There are no condition issues to report – obviously the mounts are brand new, but the stick is also in a remarkable state of preservation.

I have never been disappointed by Eury – maybe there are weak or ineffectual sticks out there, but I’ve yet to come across one.

This bow is very typical, supple and quite thick-feeling, with a gorgeous fat sound and immense reserves of power. Like so many great early bows, it needs a bit of cranking up before the magic happens, but when you get the hair tension right it suddenly acquires a strange energy and the music seems to play itself. If you’re used to a modern bow based on the Sartory aesthetic, it can take a bit of acclimatisation before you step back enough to let a bow like this do the work. But once you have the feeling there’s no going back…

All in all, this is a great stick for any player who needs power, projection and nobility of tone.