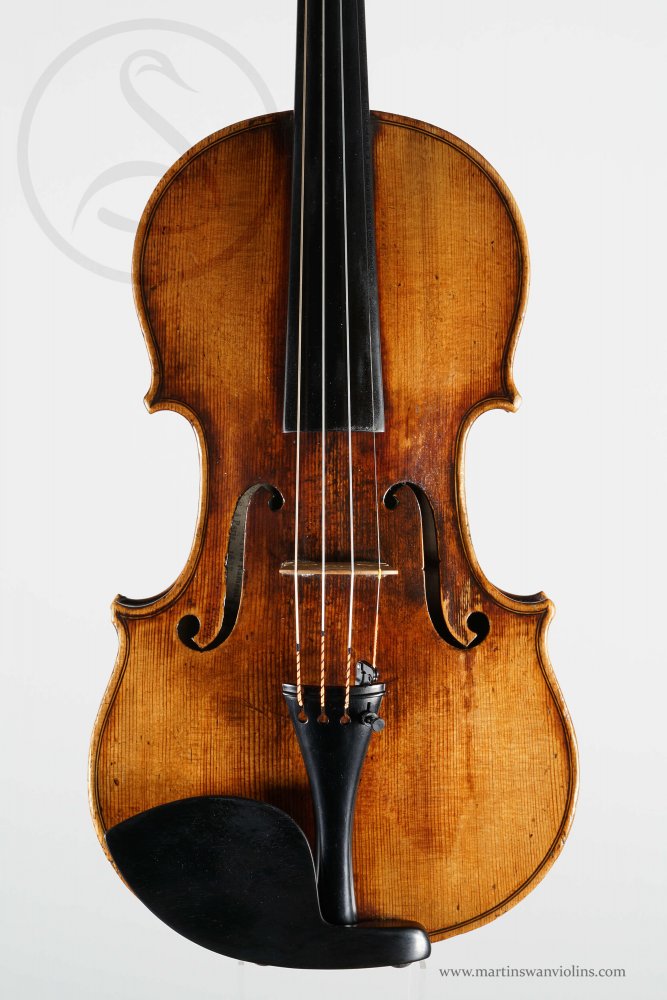 Jacques Pierre Thibout is considered to be one of the best Parisian makers of the early 19th century. We have two violins of his at the moment, this one very much a player’s instrument with some minor restoration and a big bold sound.

Thibout’s violins are most easily recognized by his unique rib corner joints. Mostly he made violins on his own model with wide c-bout curves, strongly raised edges and full arching, but here we have a very nicely observed Strad copy, flat in the arch and generally more slender and refined. The varnish is also more conventional and closer to the varnish of contemporaries such as Georges Chanot and ASP Bernardel.

The front and back of this violin are both one-piece, the table of irregular but very straight grain, the back with a dramatic narrow flame descending slightly to the left.

It’s in generally very good condition, though there’s a well restored crack running down from the treble f-hole, a minor wing crack above, and a repaired crack to the A peghole. The original varnish is well perserved though the colour is rather faded on the table.

The sound of this violin is big and full-throated – it’s a powerful player with a lot of personality, probably not the right instrument for a shrinking violet! The general tonal character is quite dark, but with a lively response and plenty of zing – very good balance, clear and articulate even in the high positions of the middle strings. Lots of attack, great dynamics, a muscular and mature sound very reminiscent of Lupot.