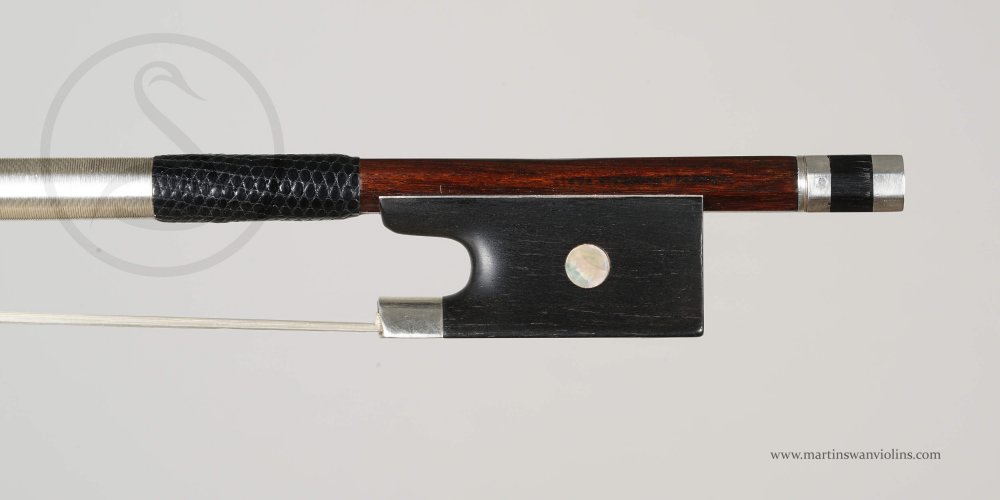 Jules Fétique was apprentice and assistant to Eugene Sartory, and then went to work with Caressa & Français in 1917, where he stayed for almost 30 years. We can date this bow quite precisely because in 1920 Caressa & Français became “Albert Caressa”, and Fetique’s bows were branded accordingly. He is without question one of the three greatest talents of the 20th century, along with Sartory and EA Ouchard.

This bow has a round stick of very dense brown pernambuco with a random figure – mounts are silver and ebony. The condition is unusually good – there are some signs of use but someone has taken very good care of this bow. There’s some very minor wear to the handle and the thumb projection, there are two small dents in the adjuster, but the stick is beautifully preserved and relatively unmarked.

It’s not often that a bow really surprises me, but this one did – in appearance it’s elegant almost to the point of being skeletal, yet it has such reserves of power. The wood must be very dense to achieve this combination of strength and response – add into the mix an ideal balance and weight, and you have a real racehorse of a bow.

This is not a bow for a discreet player , the sound is clear, incisive, and loud, and if you don’t know what you’re doing this bow will only make you sound worse! But if you’re looking for a supremely responsive bow that will do what you want in a way that people will hear, then it’s pretty unbeatable.