This is a superb collectable bow by one of the most obscure members of the Knopf bow-making dynasty, which dominated the German trade in the 19th century. I’ve gradually become aware of the spectacular playing qualities of good Knopf bows, mainly on the context of the bows made for Kittel and for the great mid/late 19th century firms such as Ludwig Bausch and Richard Weichold. 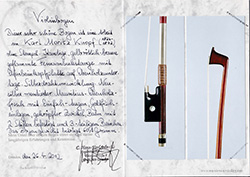