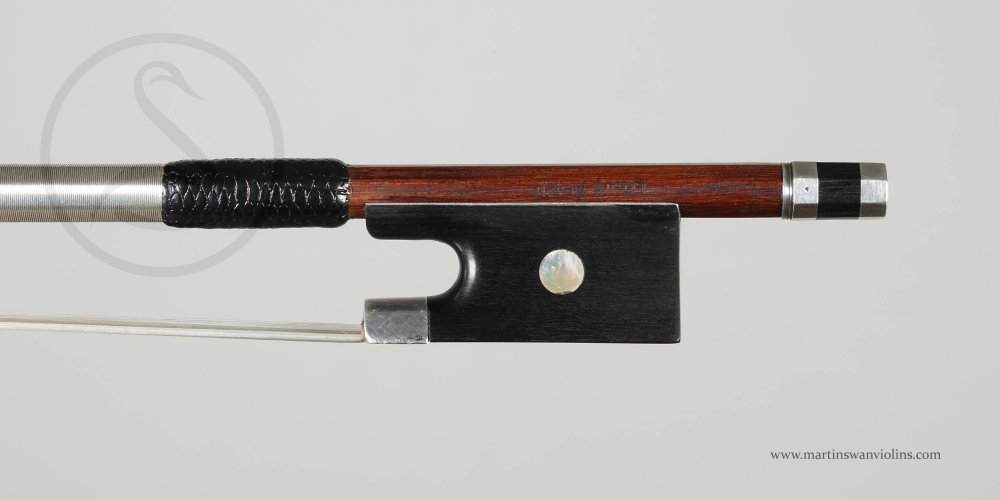 Louis Bazin was a third generation bow-maker of consummate skill whose work is still undervalued simply because he worked in Mirecourt and not Paris. This bow is a mighty player and in top condition.

It remains a mystery to me why Mirecourt makers are regarded as poor cousins to their Parisian counterparts – it’s really hard to discern any differences in the level of skill or the value of their respective bows to musicians.

But there we have it, and a great Louis Bazin or Louis Morizot represents something of a bargain for a serious player on a budget.

This is an unusually fine example – the stick is of round section pernambuco, wine-red, highly figured and full of character. Mounts are of silver and ebony. The condition is pretty faultless – there are some tiny marks to the varnish on the head, otherwise very few signs of use, and one of the best preserved examples I have seen.

This is a big, strong, bold bow, but without being overly heavy or difficult to spur into action. The balance point is relatively high up the stick, and this gives a lot of traction and heft to a bow of 60 grams…

The sound is full-bodied and warm without sacrificing cleanliness – great articulation and attack, easy staccato, and a smooth legato. The stick is strong but with a good spring and plenty of life.

An outstanding bow for the price, best suited to a player in need of volume and projection.