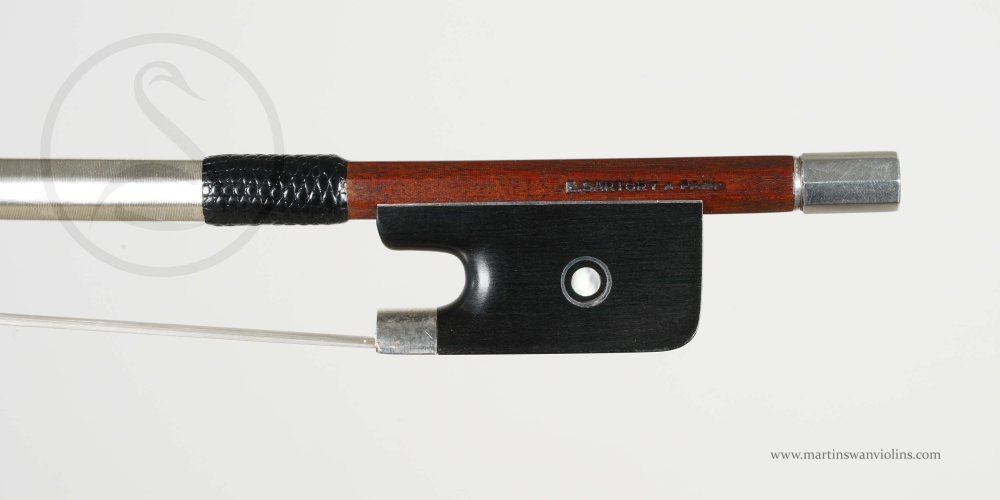 This is a great Gillet viola bow in an outstanding state of preservation – it’s a phenomenal player too, strong but very responsive.

Louis Gillet is a maker whose work just got better and better, and his later bows have a precision and authority that’s sometimes lacking in his earlier work. His close collaboration with Sartory served him in good stead, and he came out of that experience with the exacting standards of his employer, and with a clear vision of what musicians needed.

This bow is the nicest Gillet we have seen – the wood is exceptional, the mounts are perfectly proportioned, and the condition couldn’t really be better.

The two Sartory brands, above the frog and unusually in front of the lapping, suggest that this might have been sold by Gillet as a Sartory, but the bow carries his own brand under the lapping.

The stick is of round section pernambuco, dark orange and with an outrageous figure, particularly on the audience side. Mounts are silver and ebony. The bow is in near mint condition – very little wear to the handle, and only a few tiny dunts to the varnish of the stick.

We expect a later Gillet to be good, but this bow is very good. It has a strong and projecting sound but almost entirely uncoloured. Perfect balance for a viola bow, favouring the head, and a superfast action. Lots of grip and bite, but without granularity – unusually agile and clean off the string, but with plenty of heft for a big legato on the C string.

When it comes to 20th century makers I think you’d be hard pressed to find a better example – just a great bow!

Look at other viola bows like this Louis Gillet Viola Bow