Pierre Guillaume and I have a running joke that James Tubbs made a bow a day and drank a bottle of whisky a day – the quality of the bow depending entirely on which of the two he finished first!

This wonderful photo of him in his 80s certainly hints at a slightly chaotic working practice, the hat bent out of shape and the topcoat and cravat suggesting someone who doesn’t quite care what day of the week it is, or whether he’s going fishing or to a funeral.

But we do him an injustice and we know it. The fact is that anyone who could produce such remarkable bows over a 70 year working life deserves respect and admiration. His best bows equal the best bows made by any maker at any time. Their playing qualities are unique, deep and smooth yet bristling with energy.

A Tubbs bow is also unique in design, and immediately recognizable – the combination of elegance and utility being the expression of a singular and wilful mind.

It’s fair to say that few makers are as infuriatingly inconsistent as Tubbs, and it took me quite a while before my eyes were opened. The first dozen I tried were all the sort of whippy sticks which Wm. Retford witheringly describes as only good for “the Maids of Mayfair”. These bows are incapable of staccato, and will wilt under even the slightest pressure. There’s also a known problem with the head and the frog being out of winding, as the old joiners used to say – most people don’t really notice this until they put the bow flat on a table.

But at some point I found a truly great bow in my hands and discovered it was a Tubbs. Since then I have been hooked, and while one can’t pretend that all are worth having, the good ones are unbeatable. Looking back at our sales over the last few years, I’m not surprised to discover that we have sold more bows by Tubbs than by any other maker.

There’s a great deal of biographical information online about James Tubbs and no need to regurgitate it. I thought it might be useful in this article to point out some of the features of a Tubbs, and to speculate a bit about the guiding intelligence behind these remarkable bows.

The quintessential Tubbs bow took a while to evolve. We see features of it even in the earlier work carried out for his father and for Dodd, for example in the very swept back ferrule on the frog of this Dodd viola bow.

Other early examples show experiments or points of style which were gradually expunged, such as this Dodd influenced half-mounting on a bow made for WE Hill circa 1860.

or a very uncharacteristic head shape and choice of wood on this later WE Hill.

So the classic Tubbs bow emerged through the usual process of trial and error, refinement and reflection that we see in the work of any maker with a long career. Retford sums it up well : “The Tubbs bow is a straight forward product. Silly mannerisms are missing, the whole design being entirely practical and efficient”.

The efficiency Retford refers to is both in the making and in the use. A perfect example is the wedge-less ferrule which we find in most unmodernised Tubbs bows …

If you are prepared to follow the rules which Tubbs imposes on you, the bow is quick and easy to rehair. But if you’re a bit full of yourself or think you know better, it will be completely maddening. For this reason the vast majority of Tubbs bows have been “improved” to accommodate a more dissipated or individualistic approach to rehairing. Your average VM school graduate seems to take exception to being told how many hairs should fit on any given bow …

People assume that Tubbs was a difficult character. He is known to have liked a drink, he is presumed to have fallen out with Hill, and we know that whenever he got the chance he would re-brand WE Hill-branded bows with his own Jas. Tubbs brand. Combine this with the rigour and discipline in his making and it’s easy to imagine him as a tetchy loner.

Personally I think he must have been heavily influenced by his family circumstances. He was the oldest of 11 children, in very poor surroundings – he must have seen the limited space allowed him on the planet gradually encroached upon by others. Perhaps this made him wilful, and perhaps this is why he preferred to be alone in his own space.

Philip Kass points out that 7 of the Tubbs siblings worked as bowmakers, and that around 1878, James had to change his brand from J. Tubbs to Jas. Tubbs so as to differentiate his work from that of his brother John, who was being a bit of a success in New York.

It’s not hard to imagine a character evolving from all of this, a bit prickly, wishing things to be “just so”. His bowmaking certainly became more streamlined and unvarying in design, and by the mid 1880s the Tubbs bow was an entirely predictable thing.

The sticks are round, generally stained dark brown or black. The face is silver, with a slightly tall nose to allow for the face to be pinned at the front – most Tubbs bows still have their original silver face, and it’s a mystery why other makers haven’t followed suit. The frog has a plain pearl eye, and the adjuster (unusually long but very easy to grip) is plain silver.

Some gold-mounted bows are unstained to show off the quality of the wood, and there are also chased metal bows, often exquisitely engraved, but the design is set in stone. Here’s a lovely frog from a gold-mounted bow that was doubtless made to order …

In the last two decades of Tubbs’ working life there are no significant changes in his work apart from the elimination of pearl eyes in favour of a plain ebony frog. There are various theories for this, failing eyesight or other incapacity – I prefer to believe that Tubbs just found the eyes superfluous, and preferred to look at an area of black ebony than a silly bit of glitter!

Looking at this later viola bow, I don’t disagree …

And yet we have to address the question of inconsistency – why is it that someone so talented produced so many awful bows too?

It’s only fair to say that these whippy sticks are largely confined to the 1880s/90s when his work was much in demand and quite highly priced. Tubbs was an artisan, a driven and disciplined worker with a huge output, not a precious creative type.

We have a very modern conception of violin makers and bow-makers as “artists”, headstrong giants who pursued their ideal with the ruthlessness of Beethoven. But the reality was much more that there was a pile of pernambuco, a daily output to be achieved, and mouths to feed. The softer bow made use of the weaker wood – waste not want not – and such bows were ideal for amateur dillettantes who might enjoy scraping away at a bit of Schubert on Sundays, but who would rarely venture outside first position and would rather sit at the back please if that’s OK?

And Tubbs is hardly the only maker for whom the great was the enemy of the good – Dominique Peccatte, perhaps the most idolized of all French makers, churned out his fair share of brazilwood sticks that you wouldn’t wish on your worst enemy. And Maline – don’t get me started! 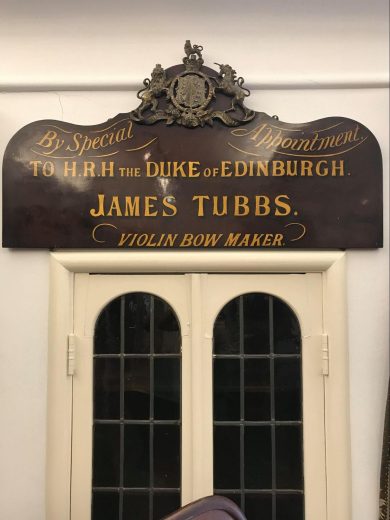 For me there is no question that James Tubbs was one of the greats. His viola bows are sublime and hugely appreciated, and violinists who try a really good Tubbs don’t tend to look back. We love Tubbs, and we are not alone…

Currently for sale by James Tubbs

Sell your bow with us
We use cookies to ensure that we give you the best experience on our website. Read more. If you continue to use this site we will assume that you are happy with it.Ok, got it!