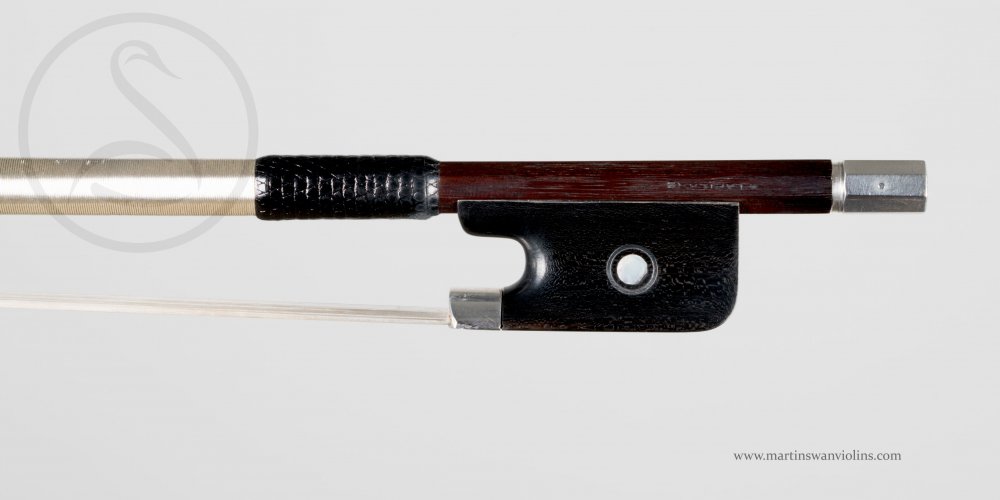 This is a very attractive viola bow by Marcel Lapierre. Branded twice and dated 1960 under the frog, it’s in excellent condition – it’s also a remarkable player for its price.

Marcel Lapierre is a mid-20th century Mirecourt maker who produced a large number of bows of varying quality, both under his own name and for various other firms, particularly Vidoudez in Geneva. His name is most commonly associated with his close collaborator EA Ouchard, whose model he often followed and whose stylistic traits he shared (for example the practices of branding on both sides of the stick and of dating the stick).

Here we have an unusually nice viola bow from 1960 – the round section stick is of very dark red pernambuco, mounts are silver and ebony. The bow is in near perfect condition with no blemishes or signs of use – even the faceplate is original.

Although at just over 69 grams this isn’t a heavy bow it makes a big sound and it feels solid in the hand. It has enough bite to get tone out of the lower reaches of the C string, and its overall character is warm and a bit crunchy. It really excels in its off the sting properties – elastic and articulate but always controllable.

This is something of a gem of a bow, offering a serious fullrange sound and great technical qualities, all in a modest and affordable package.

Look at other viola bows like this Marcel Lapierre Viola Bow