An April Fool intertwined with historical fact
For decades, if not for centuries, countless thousands of violin-makers and scientific researchers have been trying to unlock the secret of the Cremonese sound, as epitomized by the violins of Stradivari and del Gesu. The extraordinary sonic quality of these violins is undisputed, and top soloists from Paganini and Sarasate onwards have consistently chosen them in preference to all others. Their unsurpassed qualities as musical tools is reflected in the staggering prices they command. Yet no-one has been able to replicate these qualities.

But now all that is about to change. We have identified the one ingredient which differentiates these violins from the hundreds of thousands of copies and imitations that they have spawned. The secret, it turns out, is not wood whose hermicellulose has been degraded by immersion in the Venice lagoons or whose structure has been toughened by the Little Ice Age, it’s not sacred geometry, Fibonacci numbers, or the application of Alchemical principles or mumbo-jumbo incantations, it’s not even the undeniably beautiful and distinctive varnish of the Cremonese Apothecaries, whose secret is indeed lost in the mists of time. Rather it’s something else, totally unanticipated yet totally obvious. Curiously, the Hollywood movie “The Red Violin” came closest to the truth, suggesting that beauty of tone was somehow achieved by incorporating the soul of a beloved individual. 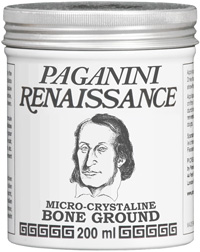 We can now share with the world that the secret of the Cremonese masters lies in the application of a special mineral ground manufactured from the bones of deceased virtuoso musicians. Not only can we prove that this was in fact a vital part of the early Cremonese violin-making tradition, we can also demonstrate that this ground actually works on modern violins, transforming an otherwise mundane instrument into a powerful concert instrument which cannot be differentiated from genuine Stradivaris in double blind conditions at greater than chance levels.

Furthermore, we have distilled our extensive research and testing into a widely available and affordable product. We feel that this is a major breakthrough in acoustic research, and it should bring to an end the sorry state of affairs in which an aspiring soloist must live in penury or sleep with a violin dealer in order to acquire a fine instrument worthy of the concert stage.

By now you will perhaps be feeling a hint of scepticism – these are bold claims. However, we are about to strain your credulity further. By the most remarkable set of coincidences, we have been able to test our methodology using some truly remarkable ingredients, namely the bones of perhaps the greatest virtuoso of all time, Nicolo Paganini.

Ours is an extraordinary story in which many things came together at the right time. Firstly we stumbled upon documentation in the Cremona city archives showing that Stradivari had made 12 individual one-off payments to the Cimitero Comunale for “sundry materials”, and that these payments always came shortly after the deaths and burials of notable court musicians. Secondly, we read in the academic papers of Bruce Tai et al that samples analysed from instruments that might be Stradivaris showed the presence of unexpected elements including Calcium salts. A fantastical conversation with Alberto Giordano, curator of the Paganini Cannone, over a bottle of grappa put us on the trail of the family of Czech violinist František Ondříček who had persuaded Atilla Paganini to disinter his grandfather’s corpse in 1893, some 15 years after Paganini’s initial burial. This extraordinary incident in the Paganini story has never been properly explained, but we hypothesized that Ondříček must have somehow been an illuminatus of the Cremonese secret, and was determined to obtain Paganini matériel.

After several years of searching and as many months of haggling we were able to acquire both of Paganini’s hands (in skeleton form) from Czech gypsies. We were even able to verify these bones against actual scientific photographs of the virtuoso’s hands taken some years after his death.

Staggeringly, Paganini died in 1840 but was only allowed burial in 1875 because of his alleged Satanic powers. During this period of mummification many accurate measurements were taken.

As soon as we were convinced of the authenticity of the bones, we set to work pulverizing them into an easily applicable ground. The results have been astounding.

Now we can reveal that the infamous modern violin which was preferred by 9 out of 10 violinists in the Fritz/Curtin Indianapolis experiment was made using an early prototype of this ground. Similarly the Fritz/Curtin Paris experiment into projection featured two violins which were prepared using our bone ground, and these were judged by audience and performers alike to be superior to all others in projection. Lest we be accused of trickery, I should point out that no-one involved in the running of these experiments knew of our behind-the-scenes preparations.

We are producing a limited edition of violins incorporating this ground, and we have been so gratified to have their luminous tone and supernatural powers of projection acknowledged by top soloists.

We don’t have much Paganini skeleton left, but the greatest virtuoso of our time, Leonidas Kavakos, has kindly agreed to gift his fingers on demise and we are soliciting further contributions.

Ours is a mercenary world. But it is not our intention to keep this momentous discovery to ourselves, rather we hope that it will benefit the entire violin-making and violin-playing fraternity. We think that our mineral ground will finally bring about a much needed democratization of the world of stringed instruments. With this ground, it should be possible to make world-class violins which are as affordable as world-class clarinets, and as a result, many negative relationships of dependency, usury and puffery can be set aside.

To this end we have decided to make our Renaissance Bone Ground available to everyone who wants it. The 200ml tub carries a retail price of £256.30, representing a saving of approximately £9.5 million on the price of a Golden Period Stradivari.

Martin Swan is a director of Martin Swan Violins, in which capacity he has handled many of the world’s greatest instruments. He also conducts acoustical research at elementary level, collaborating extensively with Nobel laureate Peter Higgs, the eminent physicist who posited the existence of the Higgs Boson particle.