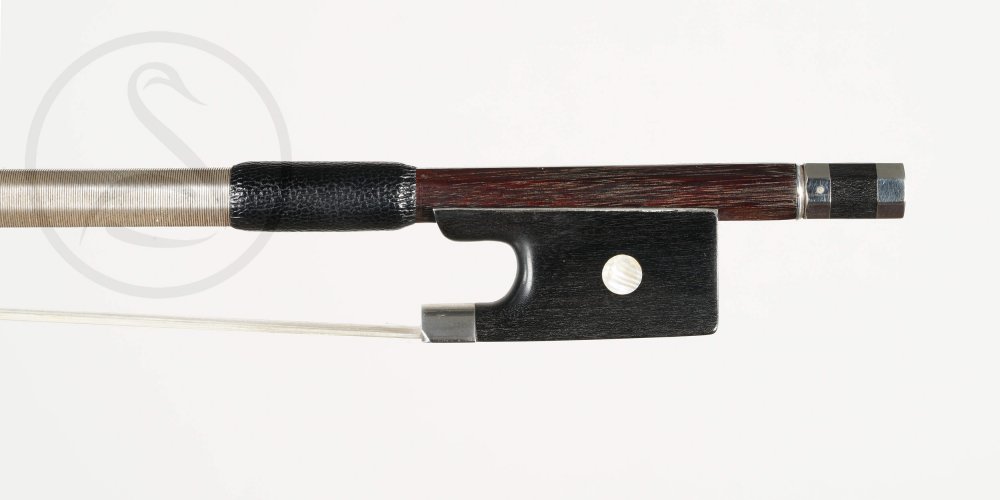 Nicolas Simon (also known as Simon Fr.) is a superb maker whose life and origins are still poorly documented. All we can say with certainty is that he made exceptional bows broadly in the style of Peccatte. This example is a great player’s bow in very good condition.

This is a nice example of Nicolas Simon’s later style – the head pushing forward, the underslide pinned rather than held with screws, the button slightly longer. But still a characteristic work by this maker with his bold head chamfers and the distinctive upwards curve to the throat of the frog.

The stick is of round section red pernambuco, unusually figured and warm-toned for Simon FR. Mounts are silver and ebony.

The condition is generally very good but there’s a small restored crack in the thumb projection of the frog as well as a slight chip to the bottom of the frog behind the ferrule. The stick is generally excellent but there are a few small nibbles in the last few inches.

To be honest it’s hard to find anything to say about this bow, which is the ultimate proof of a great bow. It does everything, it’s effortless, the sound is centred, the tone and the action are well balanced. There’s a roundness and sophistication which you just don’t find in 20th century bows, but in other ways the bow plays as if it was made yesterday.

All in all, a very nice example from this highly under-rated maker…