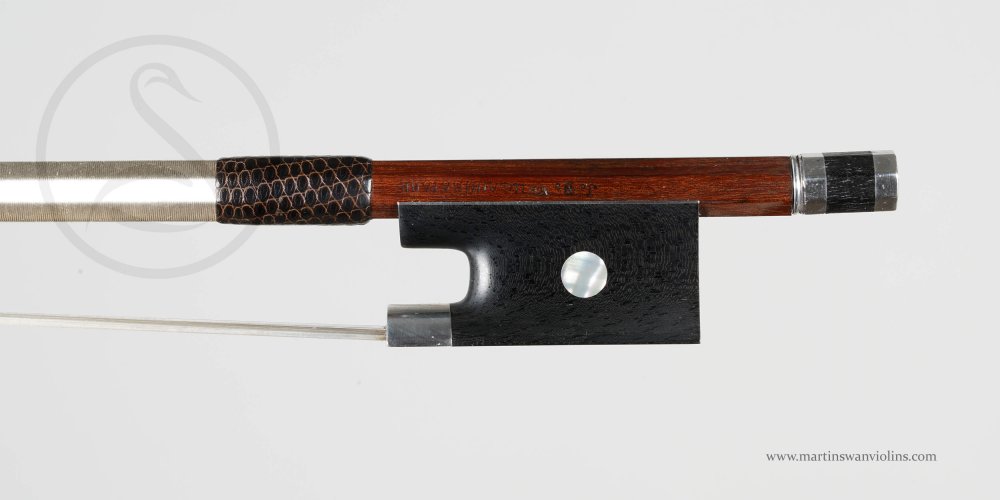 This is an exceptional Pierre Simon stick made for Vuillaume, with later copy mounts. The stick is in near-mint condition and the playability is all you would expect from one of the greatest makers of the 19th century.

Pierre Simon is a maker who enjoyed a long career at the very top of the French bow-making establishment, first working for JB Vuillaume, then a successful independent maker selling under his own name but also supplying Vuillaume, and finally working for Gand & Bernardel. His work is of a very high standard, and along with Dominique Peccatte and Joseph Henry, perhaps the most consistent of the “top names”. All three makers produced bows which have all of the magic of the early Parisian school, but which are still relevant to the broadest cross-section of contemporary players.

Unfortunately the success and popularity of these bows incurs a heavy price tag, but a stick with copy mounts is a good way to experience the quality without the damage to the wallet.

In this case the frog and button are both later copies (the button has been replaced since the certificate was issued). The stick itself is in outstanding condition and appears almost unused. It’s of round section orange-brown pernambuco, with a typical colour and consistency for Simon – two prominent knots are equally typical. Like most makers of this period, a great piece of wood wasn’t rejected on account of some purely aesthetic flaw…

The brand to the bow has been modified – the “Vuillaume a Paris” is original, but the “JB” is a fanciful later addition!

Like many of the great Vuillaume school bows, this one won’t knock your socks off straight away. It plays like a bow should, and it immediately feels right in the hand. It only reveals its quality when you go back to the other bow you were using for comparison, and which you thought was pretty good…! Suddenly it will sound thin, skittish, or just a bit plain.

From a technical point of view there’s nothing particularly outstanding about this stick – it’s well-balanced, totally accomplished and very comfortable. The magic is in the sound, which has breadth, complexity and edge – everything you play just sounds better, and more intended.

It would be an ideal bow for a soloist who’s looking for nuance and beauty of tone with as much projection as possible.