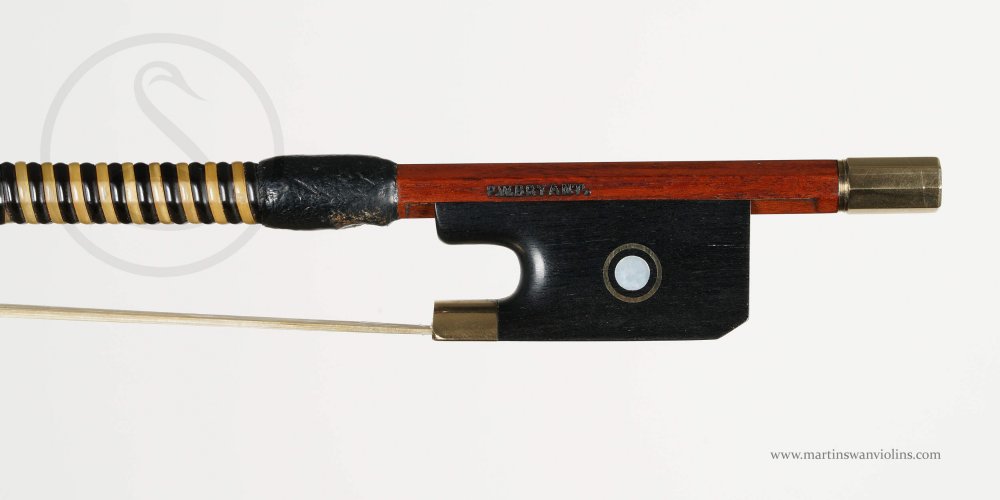 This is a very fine gold mounted bow by Percy Bryant in near mint condition – it’s a tremendous player and a great example of English bow-making at its best.

Percy Bryant is pretty much the only English professional maker of the 20th century who didn’t train with Hills. Instead he had an early apprenticeship with the Withers firm ending around 1930, and then a 50 year career as an independent maker. He’s particularly well-known for his baroque bows, and the characteristic angled heel on his modern bows is borrowed from early English making.

The stick is octagonal section orange-brown pernambuco with a subtle figure. The mounts are gold and ebony, with the frog sitting Hill-style on the stick.
The condition is near-mint – the only issue to report is a minor loss of varnish towards the rear of the head.

I fell for this bow the moment it touched the strings – and that doesn’t happen often. Unlike so many English bows, it’s supple and nervy while still adhering beautifully. The tone is rich yet crisp and although it’s quite a light bow it’s weighted towards the tip so it never feels underpowered.

Wood to wood mounts and whalebone laps always appeal to tonal purists – I’m not really one of these but there’s no denying that this bow is unusually free and responsive. It has much of the character of a great early 19th century bow, producing a fantastic sound out of all proportion to the effort it requires.

A racy and stylish bow in both looks and sound.